For years, musicians Mike Einziger and Ann Marie Calhoun wanted to provide music fans a better sound experience when they were on tour. Sure, fans who got front-row seats had a great experience, but what about the fans who sat behind the speakers or those sitting in the back? Most of the time all those folks can hear is the people around them.

It was a problem that plagued Calhoun and Einziger when they were on tour with Hans Zimmer, and one that didn’t seem to have a good universal solution that could work in every venue around the world. So they made one.

The culmination of Calhoun and Einziger’s work is called Mixhalo – a software solution that interfaces directly to a venue’s soundboard and broadcasts the mix locally to anyone with an app at the show through a private wireless network. It’s a platform that could radically change how you’ll listen to artists at venues all across the US – and, if things go well, all across the world.

Music for the masses

The benefits of Mixhalo are pretty obvious to anyone who’s ever sat in the back of a crowded arena during a show: the app allows you to hear more of the music and less of the crowd.

But, according to the two co-founders and its CEO Marc Ruxin, it’s more than that: It’s not only about balancing the scales of auditoriums and giving everyone a chance to hear quality music, but it also allows fans to still hear the music if they need to get up out of their seats and, at a big festival like Coachella, Lollapalooza or Outside Lands, to hear what’s happening on other stages.

And so far, it seems people like what they hear – the company has already announced a $10.7 million Series A financing led by Foundry Group and has worked with globally recognized acts like Bruno Mars and Metallica – the latter of whom, Calhoun and Einziger told us, actually used Mixhalo to showcase every individual instrument by creating a separate stream in the app.

The magic behind Mixhalo is the local wireless network that it sets up at each venue. Once you’re within range of the network, the free downloadable app on your phone will show you the different stages available, and you can connect to a live feed from the soundboard. Plug a pair of headphones into your phone and you’ll hear the music from the stage in real time.

The technology’s biggest public demonstration happened earlier this year at Aerosmith’s live show in Las Vegas where Mixhalo teamed up with audio brand THX, but the team plans on taking it festivals all across the US – including last month’s Outside Lands festival in San Francisco where we were able to go hands on with the audio app and meet its co-founders.

Front-row sound from the back of a festival

So how exactly can you use the app? Well before anyone arrived at the festival Mixhalo and its core team arrived to setup. They needed to install a number of antennas in sections of San Francisco’s iconic Golden Gate Park and create the network that we’d later use to hear the bands on stage through the app.

“Knowing the challenge of building a technology platform that could deliver this experience to every fan in venues of all sizes, I was skeptical it could be done,” said Ryan McIntyre, managing director of Foundry Group, the company that’s helped Mixhalo raise funding.

“However, once I experienced Mixhalo at the tiny Fox Theater in Boulder and then at the Aerosmith show in Las Vegas, I was convinced of the technology.”

Situated all around the show’s main stage and two side stages the antennas would provide a sort of wireless mesh for the app to tap into. As long as you stood within the covered area and had the app turned on, you could tune into any one of the venue’s stages. Unfortunately that means that you’re unable to tune into a concert while you’re at home but, according to Mixhalo’s team, it’s better like that as they’d have to negotiate streaming rights for every show.

By the time we arrived at Outside Lands, everything was setup and fully functioning and all we needed to do is pop open the app the see the stages. Once we picked a stage, we popped on a pair of headphones and could hear the music coming from that stage in real-time and seemingly Hi Res quality.

It’s a pretty elegant solution for a complex problem… mostly. 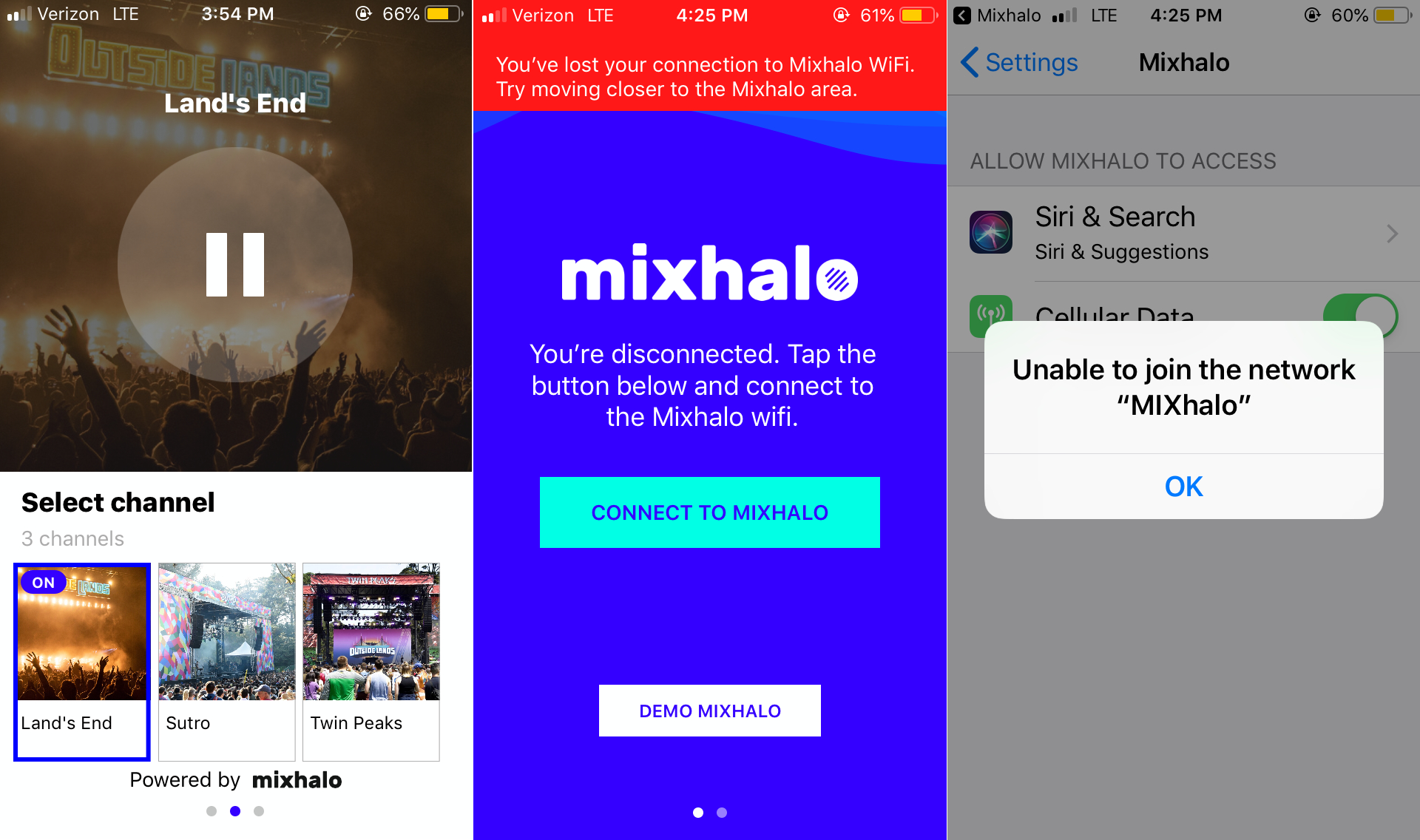 It’s not all music to our ears

Of course, setting up a wireless network the size of Golden Gate Park comes with its own set of challenges – some of which Mixhalo is still ironing out the kinks for.

One of its biggest issues is that the antennas that broadcast the signal are obviously limited in number and range – meaning in some areas the app has spotty reception and in others there’s no reception at all. When that happens the Mixhalo app will tell you that you’ve lost connection and tells you to move closer to an antenna.

Mixhalo, both the company and the app, also needs to borrow a small amount of bandwidth from the venue that’s hosting the event. In the case of Outside Lands, the team piggybacked off the vendor network, a good solution, but one that could present a challenge in which there’s limited connectivity.

You also can't ignore that the antennas are a big part of the solution. They’ll need to be at every show that wants to use Mixhalo – which means they’ll need to be transported and setup ahead of the show. That means planning time, coordination and collaboration between Mixhalo's team and the venue.

That said, all this falls on the shoulders of Marc Ruxin's team – besides the dropped signal, these aren’t things that you as a concert-goer have to care about; as long as there’s signal, you get front-row sound anywhere in the venue.

The future of live audio

The Mixhalo demonstration we went to centered around live concerts, which makes sense given its founders backgrounds – Calhoun is a world-renowned violinist and key collaborator with Hans Zimmer for a number of his movie soundtracks while Einziger is the lead guitarist and co-founder of the band Incubus.

And yet, while live concerts present a good opportunity for Mixhalo, both founders say that concert venues are just the beginning – they see a future in using Mixhalo as a way to listen to sports games, eSports tournaments, business conferences and other public events, all of which could make use of Mixhalo.

There’s also been talk of integrating the Mixhalo app into a pair of headphones, though, Calhoun and Einziger still encourage people to bring their own headphones for the time being. “We don’t want to force people to spend a lot of money to get this experience,” Calhoun told us. “We want everyone to be able to access it with whichever headphones they already own.”

With that said, if you see pairs of headphones at the next festival you go to, you’ll know why.